Around Morecambe Bay a range of different flower-rich grasslands can be found, varying with soil type and management history.

Meadows and pastures which have never been agriculturally ‘improved’ have the greatest diversity of species. Meadows are dependent on the same management practice year on year - annual cutting for hay - and tend to occur on small localised sites; their survival can often be credited to individual landowners continuing traditional practises.

Pastures, maintained solely by grazing but similarly un-improved, are somewhat more widespread but are often in isolated awkward-to-manage pockets. The more extensive areas of pasture are generally the most agriculturally marginal areas such as the summit plateaux of the limestone hills west of Kendal where the soils are so thin that in many areas bare rock dominates.

Some of the most unusual grasslands are those found on the limestones at the head of Morecambe Bay. Here specialists such as fly, frog and butterfly orchids can be found in company with wild columbine and rock rose. In a few select places where these grasslands reach the coast other rare species can be found including green-winged orchids, autumn ladies tresses and spiked speedwell.

In areas where traditional pasture management has persisted for decades and no attempt has been made to plough the land, colonies of yellow-meadow ant have developed ant-hill grasslands where the ground has become covered with conical mounds, each one an ant colony, with different plant species found on their north and south facing sides, and generally capped with thyme giving the grasslands a distinctive scent all year and a purple glaze in summer.

Often these species-rich grasslands are present in moasiacs with other habitats such as woodland glades after coppice management, on grazed woodland edges, or where grasslands and open rock habitats mix, or as natural communities reclaim former industrial areas, known as brown field sites, in old quarries and iron workings. 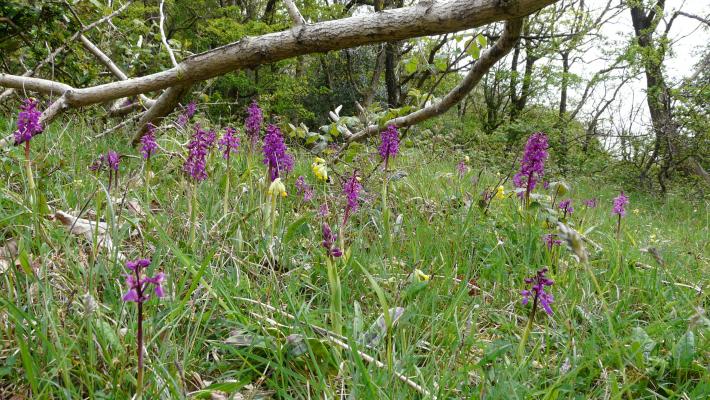