Morecambe Bay has a remarkable range of wetland types. Each is different according to water source, water movement, acidity/alkalinity, water quality and water depth and each has a corresponding suite of species adapted to its particular conditions.

Among the range of wetlands are deep nutrient-poor lakes, lowland raised bogs, limestone flushes and ‘marl’ lakes, reedbeds and rivers. These are host to vast array of specialised species from Arctic Char, a glacial relic inhabiting the depths of Windermere, to Marsh Harriers soaring over the reedbeds of Leighton Moss.

Many of the area’s rivers have catchments that reach high into the surrounding uplands. The Duddon, Leven, Kent, Lune and Wyre all have their headwaters high in the surrounding fells and carry the water brought off the sea by the prevailing south west winds back to Morecambe Bay. Each river has a different ecology, driven by water chemistry and flow rates, and host different species, with salmon, dipper and goosander present in many fast flowing areas.

The upland fringes are home to the area's lakes and tarns, many nutrient-poor and acidic, supporting plants like bog bean and marsh cinquefoil and rare animals like medicinal leech. Where calcium-rich but nutrient-poor systems are present in limestone areas, calcareous ‘marl’ fens and tarns are present with plants that include devil’s bit scabious, black bog rush, saw sedge and stoneworts.

Where poorly draining soils have allowed peat soils to develop, lowland raised bogs have formed. These rainwater fed systems often sit above the surrounding landscape, built on a foundation of peat accumulated since the last ice age. Amongst their many unique species are large heath butterfly, emperor moth, bog bush cricket and a variety of dragonflies alongside carnivorous plants like sundews.

At a few locations reedbeds have developed where more nutrient-rich waters are present. The most extensive system is at Leighton Moss where species including bittern, water rail, marsh harrier and in summer gargany are present, but smaller reed systems are scattered through the Fylde plain and new systems are being recreated in South Cumbria.

Visit our Nature Map and seasonal highlights pages to discover more about these places and wildlife: 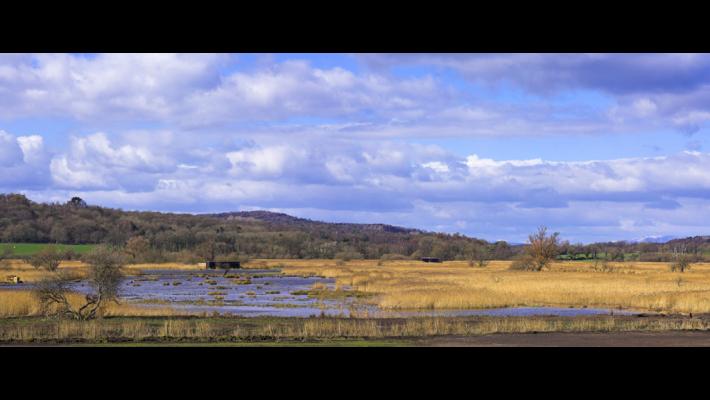